Shane's Church- The ever expanding Sphere

Well it has been some time since writing my last post.

I am today writing again for I feel something needs to move in my life and as I generally find this Blog to be a sort of personal cathartic journey that I guess I share with the Interwebs.  Here I go.

I may well have written about this is some way previously but I wont let that stop me attacking similiar information from a different perspective.

In recent times I have been undertaking studies of a formal nature in an informal way.  I explain that I have been on Coursera undertaking such courses as "Morality in everyday life" and the last course of "Buddism and Modern Psychology".  All interesting things and if you wish to understand then I highly recommend the course.

However there appears to me to be a familiar theme running through these courses and with much of what I see around me.  The search for meaning.

Many as we know search for meaning within Religion and the church and although I have not undertaken any serious study in this area I have an aversion to the word religion or Church as I see that this "can" be manipulated by the power seeking human who may well be known as a priest or other such thing.

However I do have an affinity to Buddism as I understand this to be a Religion created for human's by Humans.  Or at least this is what I undrstand it to be.  Ie there is no formal Deity.  As Buddha as I understand was a Man.

Anyway I have likely Bastardised this understanding to create something that makes sense for me.

I do not have any rituals or practises that make the practise of this church but rather an explanation of how we all fit together and how it is within our best interests to show Empathy and Compassion to all as we are all interconnected and together so we need to start acting like it.

The idea may well correlate with Peter Singers Theory of the ever expanding Circle. Which can be explored more here--> http://press.princeton.edu/titles/9434.html

It also to me has correlates with the Christian ideal of the Trinity.  But Different.

It can be explained visually as per the diagram below... 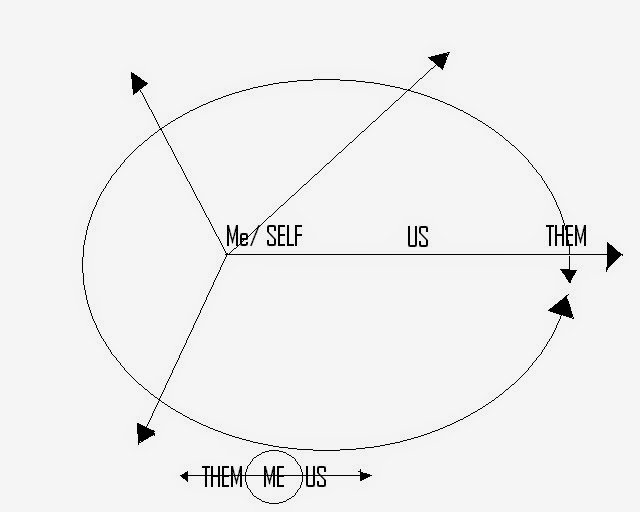 The basis of my Philosophy which no doubt is made from others as you Can see has 3 entities...

Me/ SELF = That which I consider to be #mySELF.  Pretty simple.

US = US is dependent on the context of how many people are together.  Eg If you have me and You then we can be an US. Me and an Identity group Eg Football Fans are US and there can be thousands of US in this group. You and a army can be US. Etc Etc.

THEM = Anybody who at the time is not Me or US... I for one also include all Non Human Animals and other Life as defined by ME.  But for yourself well that is up to YOU....

However as relationships go those who belong to the group of US can have a falling out and become THEM and those who we are yet to meet and do and like each other some of THEM can become one of US.

All very easy. When you understand and appreciate that US and THEM are all around ME...

As is indicated in the Book


What is ethics? Where do moral standards come from? Are
they based on emotions, reason, or some innate sense of
right and wrong? For many scientists, the key lies entirely in
biology—especially in darwinian theories of evolution and
self-preservation. But if evolution is a struggle for survival,
why are we still capable of altruism?
in his classic study The Expanding Circle, peter singer
argues that altruism began as a genetically based drive to
protect one’s kin and community members but has developed
into a consciously chosen ethic with an expanding circle
of moral concern. drawing on philosophy and evolutionary
psychology, he demonstrates that human ethics cannot be explained
by biology alone. rather, it is our capacity for reasoning
that makes moral progress possible. in a new afterword,
singer takes stock of his argument in light of recent research
on the evolution of morality.

I have produced nothing extraordinary here other than to take a few leanings from others and apply them to life as it makes meaning to me.

However as a CHURCH is often formed to explain the unknown and mystery of life.  I myself do not know the answer to what happens after life.  However if we are put through some form of eventual Judgement of our actions in life I suspect that it will based on the interactions that come about through the interactions and interrelationships of Me US and Them.

Just as a final little touch... I will borrow a little from the good book of Christianity that suggests in

Well as you can see from my little diagram above... and or below...

You come to understand that you come to ME through interactions of US and THEM. 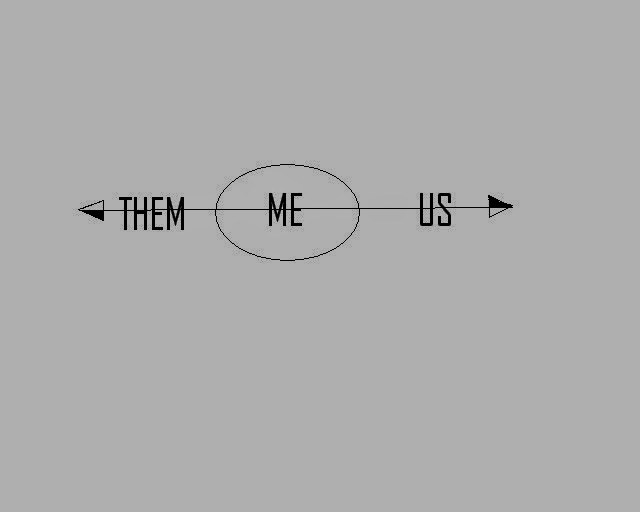 So may I implore YOU to interact with THEM and US with Compassion, Empathy and Morality...

For I am one of US and THEM to YOU!!!!
Just to also detail what I believe the #God to be in Shane's Church. I actually believe that all those items above are false and we are all one!
Eg the only thing real is energy.
That #God is the sum total of the energy available in the universe but in order to learn understand more of "Itself" smaller unit "Selves" were created. We experience and learn through as stated the interaction of Me, Us and Them. So when we pass or an ongoing basis we feed knowledge and experience back to the Universal energy of #God.
This is the only option that makes sense to me. Also explains the idea of #Buddism and many other religions of having a feeling of being "Connected" to Nature and the world, during such things as Meditation.
It is a bit "Out There" but so is the idea of a person having the ability to walk on water or be eaten by a whale!
Suppose the only time I will truly know is when I finally pass over!
Let's hope that is way into the future.
As there is life to experience. I hope I have shared a little goodness with YOU!
Bye for now!