The First peoples of the NATIONS of AUSTRALIA

Well I am excited after my first post and I would like to SAY something else now.

I respect the Culture of Aboriginal and Torres Straight Islander peoples.  I have been undertaking work within specific communities across Sydney or at least working with a range of organisations that more specifically live and work within Community.

I feel that there is a divide between the current prominent culture of Australia that is largely Anglo or European in nature and that of the Aboriginal Peoples.

Which many Government departments continue to use which is understandably why many people do not actually listen when Government or Gubber talk.

I propose that we maintain the initial movements that have been undertaken through the ideal of Reconciliation.

Often language is one the easiest ways to move a debate or movement forward is by changing the language that is used to frame and describe it.  It is for this reason that I guess I am using my words to assist in moving this Blog forward.  Some may say that this is simply words but words are powerful when stated in the context of powerful people and powerful thoughts.

I am unsure if I believe myself to be a particularly powerful person or thinker but I do see how they can be used to cut and harm others.

Words as well as symbols can create great opportunity for change.

It is from viewpoint of the creation of Symbolic gestures and the effective use of language that I feel could create the opportunity to engage in a range of dialogue across our country regarding the creation of a flag of reconciliation.

A flag that is representative of the past present and the capacity to take our NATIONS into the future.

I have myself completed some work in this area and have prepared one earlier that I believe has the capacity to meld together the ideas of history from those that are hundreds of years old to those whose culture is 100's and 1000's of years old.

This flag that I prepared earlier is shown below! 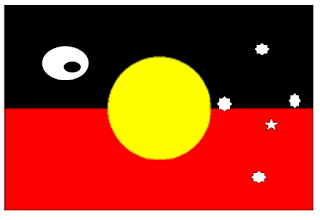 I also see that there is an opportunity to reframe the naming of our great nation to also represent the many nations that once covered our great country.

Which in my belief creates a great segway to my idea that is as I see it inclusive of all those who call Australia Home.

This is to call our Australia - The Nations of Australia and subsequently the Aboriginal people could state they are the:


The First peoples of the NATIONS of AUSTRALIA.

BTW I do have a back story to how I cam up with the design of the flag above much of this will be obvious if one is to look at the current Aboriginal and Australia flag together but there are some added additions of ideology and a good mix of supposed Historical facts that bring together the story of building the nation that is currently known as Australia.  But I shall have to write about that another time as I have another engagement at the moment.

Plus it is often suggested that people are given time to digest potentially confronting information before they are asked to give further opinion on those issues.

So here is to further time and may you return to hear further explorations and thoughts from the #incrowd!

FOR THE FUTURE:
I myself feel that there may well be something to talk about regarding the Apology that was Given by the then Prime Minister Kevin Rudd to the First Peoples of the NATIONS of Australia.

Could there be a need or the possibility to have the First Peoples give a response to this apology?
If so who would be the best ambassador to give this response?  Would the majority of those who are Aboriginal agree that this person or entity is the right one to deliver that message.

All I know is that there is much need for physical and spiritual healing to be undertaken from many people from all cultures and from all schools of thought to develop the best outcome for all involved.

BTW if you wish to follow up with greater detail on how I may have actually come up with the design above goto my following post, titled: "The Devil is in the Detail"

Well of course this is but 1 option. There could be others!